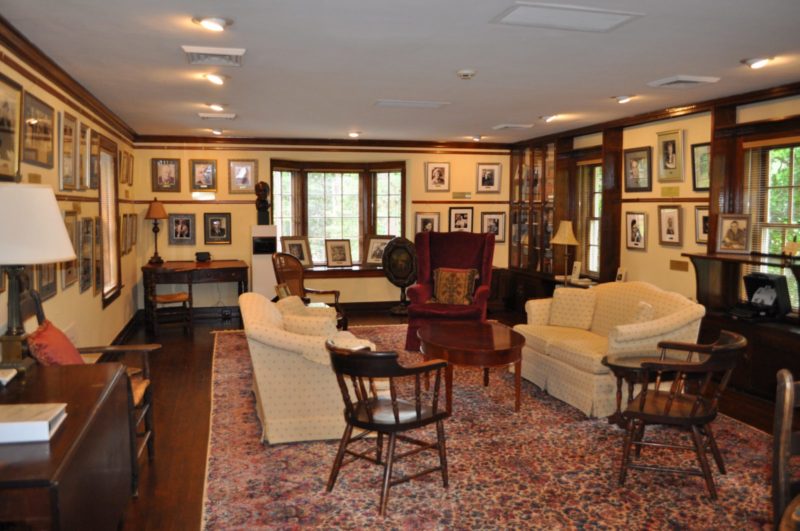 The NC Literary Hall of Fame is free and open to the public, Monday through Friday, 10 AM – 2 PM.

In ceremonies held at Weymouth Center May 18, 1996, fifteen North Carolinians were inducted into the North Carolina Literary Hall of Fame, honoring their contributions to the rich literary heritage of the state.

Additional members may be selected annually to join this distinguished group. Please click here for a list of inductees.

The Hall of Fame is located in the former study of James Boyd, with displays of plaques, pictures, books and other memorabilia. This study was once the literary gathering place that Jonathan Daniels declared “launched the Southern Literary Renaissance” in the 1920s and 30s.

The North Carolina Literary Hall of Fame realizes a dream of the late Sam Ragan, Poet Laureate of North Carolina (1982-1996). It was authorized by joint resolution of the General Assembly in 1993 and formally established by a grant from the NC Department of Cultural Resources for the North Carolina Writers’ Network, an organization serving writers and readers across the state.

In the spirit of those who over the centuries have graced North Carolina with literature of such quality, beauty and power, the North Carolina Literary Hall of Fame proudly honors writers who have achieved enduring stature in their devotion to their writing and to their state.

In the final months of his life, North Carolina poet laureate and legendary newspaper editor Samuel Talmadge Ragan (1915-1996) sat for sculptor Gretta Bader in his office at The Pilot in Southern Pines. A group of friends commissioned the bust and later organized a statewide campaign to purchase it for the Weymouth Center. This tribute was appropriate for a number of reasons.

Ragan was instrumental in preserving Weymouth, the former home of historical novelist James Boyd and his wife Katharine, as a cultural center, and also in creating the North Carolina Literary Hall of Fame, which is located here.

Famous for his flowing white hair, trademark bow tie, and fedora hat, Ragan was the consummate Southern Gentleman. He was for many years executive editor of the Raleigh News & Observer and a leader in many artistic, literary, and journalistic organizations. He knew the Boyds well, visited Weymouth often, and bought The Pilot from Katharine Boyd in 1969.

Governor James B. Hunt, Jr. named him state poet laureate for life in 1982, and his books of poetry were twice nominated for the Pulitzer Prize.

His weekly literary column, “Southern Accent,” ran for nearly fifty years in the N&O and The Pilot, promoting the careers of countless North Carolina writers. Ragan was inducted posthumously into the North Carolina Literary Hall of Fame in 1997. His bronze portrait was officially presented to the Friends of Weymouth at an unveiling celebration on September 17, 2005.

“From the moment I encountered Sam, I sensed his intensity, the warmth of his voice and manner, the richness of his capacity to listen, his accessibility. In this sculpture, there is something in gesture, smile, and expression that convey the extraordinary man I came to know and love. My hope is that it speaks to all of us that Sam is still ready for a good conversation.”

About the Artist: Gretta Bader

Gretta Lange Bader’s work is in the National Portrait Gallery and the Kennedy Center for the Performing Arts in Washington, D.C. Her more than 30 commissions include U.S Senators J. William Fulbright, Frank Church, and Claiborne Pell. A graduate of Pomona College, Bader studied art at the Akademie der Bildenden Kunste Munich, the Corcoran School of Art, American University, and the Rhode Island School of Design. She taught at The Art League School in Alexandria, chairing its Sculpture Department from 1984-1989, and was a visiting artist at the American Academy in Rome. She was married to William B. Bader, former U.S. Assistant Secretary of State for Educational and Cultural Affairs. She died in Washington, D.C. in 2014.

Weymouth Center for the Arts & Humanities is funded through your generous donations. Help us keep the legacy of North Carolina’s great writers alive by becoming a sustaining donor. Here’s how.  For more information, call (910) 692-6261.