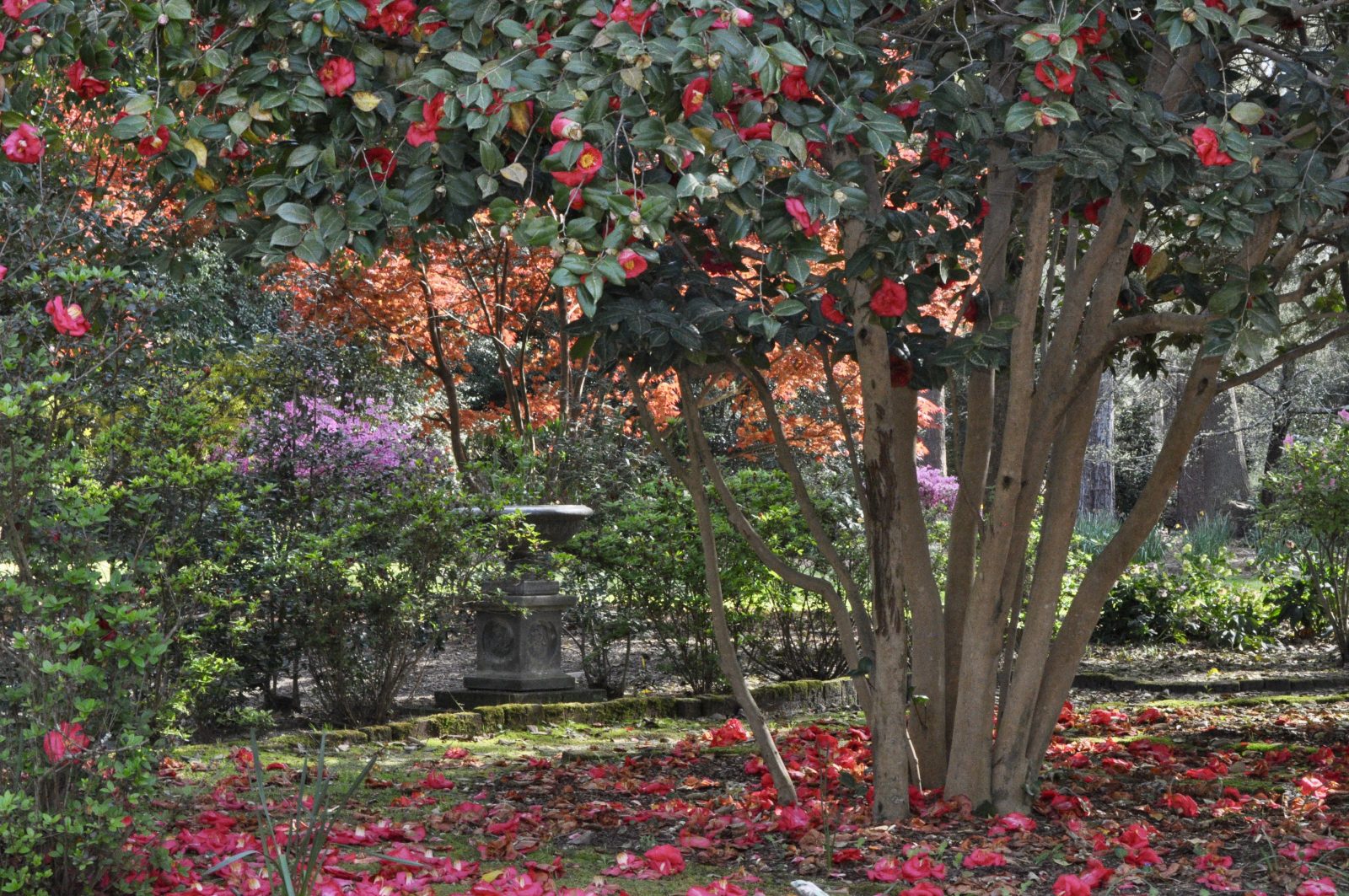 The Weymouth Gardens are open daily from sunrise to sunset. Occasionally the grounds may be unavailable to the public due to an event. It is a good idea to call ahead. Group and individual tours of the house and grounds are available upon request. Please call (910)692-6261.

The gardens came into being in the early twenties when Weymouth Center for the Arts & Humanities was the home of Katharine and James Boyd, who was a popular writer during the early part of the last century. James predeceased Katharine. Following her death, the property was acquired in 1979 by the Friends of Weymouth, and the house is now used as a cultural event venue, a writers’ retreat, as well as a home for the North Carolina Literary Hall of Fame.

The original gardens were restored by Elizabeth Ives (sister of US Ambassador to the UN, Adlai Stevenson) and Helen Greene, an active local gardener. Since then they have been kept up entirely by volunteers with financial help from the local garden clubs, the Carolina Writers’ and Poets’ Associations and generous private contributions.

The chief attraction is probably the two parallel long beds filled with bulbs, perennials, and annuals. These have frequently been described as being close to an English cottage garden. They lack any formal planning, but we try to provide a varying blend of colors from March through November since they are a setting for the many weddings performed throughout the season. They also get a great deal of use from the general public as well. The beds lead to two pools filled with an unusually beautiful array of tropical lotuses and water lilies. They are backed by a serpentine wall copied from Jefferson’s home at Monticello. Late February sees a line of weeping Japanese cherries near there in full bloom followed by a riot of azaleas and daffodils in Spring.

Sam Ragan, a past North Carolina poet laureate, was deeply involved in Weymouth from its beginning in 1979 until his death, and he emphasized its role in supporting writers. Because of this, two large sections, “The Poet’s Garden,” and “The Writer’s Retreat,” have been planted especially for their benefit, although open to the general public. Azaleas, rhododendrons and many other flowering shrubs under longleaf pines fill both areas. The Poet’s Garden has an arbor with chairs and a table for the use of writers, and the Garden for Meditation is included in the Writer’s Retreat. The latter contains a museum copy of one of the earliest Buddhas dating from the 6th century B.C.

Many small beds have other uses. Some are filled with native flowers, some with hostas, some with herbs. One acre is devoted to wildlife, being given over to native trees and shrubbery, and resulting in the small wilderness (nothing park-like about it!). Flowers that will attract butterflies and bees are found throughout since this is a major concern. The Butterfly Nursery emphasizes the need for caterpillar food.

Volunteering in the Gardens

We need volunteers to help in the gardens. If you are able, please come on either Tuesday or Friday morning of nearly any week in the year! The Dirt Gardeners begin work at 8:30 am and usually wrap up by noon. You do not need a green thumb to start but we guarantee that you’ll have one in time after working with some of this area’s most dedicated gardeners!

The gardens at Weymouth Center for the Arts & Humanities are sustained by your generous donations. Consider becoming a monthly donor of Weymouth and help us keep the cultural landscape of James & Katharine Boyd thriving for generations to come.

Learn more about the ongoing conservation efforts at Weymouth including the Cultural Landscape report and more about Weymouth’s history.